...to explore others of Jane's books, click on BOOKS in the menu up in the right-hand corner of the page, or go directly to a book's page with the book links on the right. 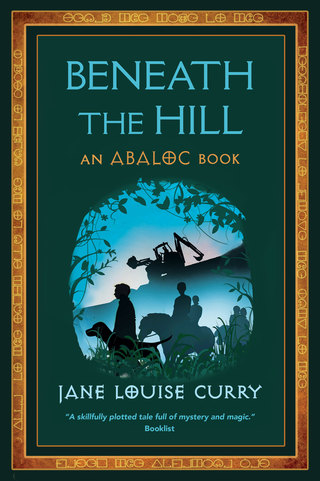 A CandleWood paperback and e-book


BENEATH THE HILL is the first of the seven tales of Abáloc, the realm at the long-ago heart of Westerworld-- a wide land of wonders, adventure, and many peoples-- which in these tales lies behind the history and legends of the New World. At Abáloc’s heart were the surpassingly beautiful caverns of Nutaye, "the City of the Moon Under the Mountain." In an even earlier time, when the Westerworld was known as Astarlind, and the Great Ice covered much of it, Nutaye lay under the snows south of the Ice, and Abáloc was known as Aabla. There... but that is another story, for later...

This summer, "Miggle" Arthur has created a treasure hunt she is sure her sister and visiting cousins will think is the Real Thing. The "treasure" her clues lead to is a beautiful carved box containing a mysterious key she has found, and the game is a success, but not at all in the way Miggle plans. "The Bane"-- the ugly strip mining which has used huge earth-movers the children call "The Elephants" to tear up the wooded mountainside above the Arthurs' farm has awakened a long-buried and frightening something, and the five cousins are drawn into an adventure under the mountain far more exciting than any even the imaginative Miggle could have dreamed up. For who are the mysterious and beautiful people who live in the caverns no one knew were there? And can Arthur (yes, "Arthur Arthur") and Miggle and the others come to their rescue?

"...an involved but skillfully plotted tale of mystery and magic." --BOOKLIST

"Reminiscent of the books of C. S. Lewis and George MacDonald….Imaginative children will find it poetic, wise and suspenseful." –CHICAGO TRIBUNE

"It begins, personally, circumstantially, with a trick treasure hunt, and mounts to a harrowing confrontation of good and evil, as the make-believe treasure becomes more-than-real…. It has elements of Green Knowe and A Wrinkle in Time--fine company for any fantasy to keep." –KIRKUS REVIEWS

"Beneath the Hill is a blissfully enjoyable book for any child of ten or upwards with imagination who also enjoys adventure. The children, Miggle, Arthur, Stevie, Trish and Kit are a splendidly real bunch and their excursion into the world of faery is so strange and yet inevitable that it carries the reader along in unquestioning suspension of disbelief to the end." –TIMES LITERARY SUPPLEMENT, London

"The illogical, irresistible sweeping of the reader into a state of being not his own, not of his time--nor of any museum, either…. this is what Jane Louise Curry splendidly achieves in Beneath the Hill…. [B]eneath [the Arthurs’] hill an evil force strives to escape from captivity, using what means it can, including the greed and unscrupulousness of the earth-rapers, the strip-miners who desolate the countryside with their giant diggers. Nature itself is partly corrupted: weasels gang up against men: fog shepherds to destruction.
The effectiveness of the story depends on its atmosphere, which changes from holiday breeziness to something super-charged, hallucinatory." –Philippa Pearce, in THE GUARDIAN