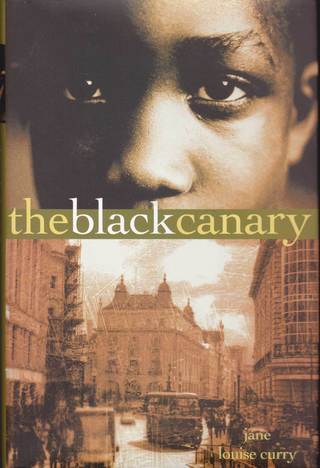 Meet James Parrett, a biracial almost-thirteen-year-old traveling with his parents. James would rather be back home in Pittsburgh, but even there he feels lost in his own life and resents the role-- the rule-- of music in the lives of his parents and grandparents, all dedicated musicians. The last thing he wants to be. In the middle of one night he stumbles-- in a dream, he thinks-- onto a way from the London of the present into a London that is four hundred years gone, but near enough to touch.

He finds it exhilarating-- but the London of the first Queen Elizabeth, rich, vibrant, and squalid, is dangerous and terrifying, too. Time after time James's attempts to return to his own time fail, but a new door opens as he discovers his own musical voice and he grows accustomed to life as one of the Children of the Chapel Royal, choristers to the queen. With success, a new and deeper terror stirs as his longing to return home begins to waver...

[Jack and Tom Garland, whose lives are so interwoven with James's in the past also appear in Poor Tom's Ghost, a sequel to The Black Canary and a suspenseful tale of past tragedy that threatens to repeat itself in the present.]

What the Reviewers Said

“…[the] story blew quite a wind through my mind…. The meeting of the two Jameses was a true coup de théatre—as it needed to be. I held my breath when I realized it was going to happen… and when the two identities met and became one (like two raindrops meeting on a window pane) I breathed a sigh of satisfaction.” --Philippa Pearce

“One of the few time-travel fantasies for children with an African-American character, let alone protagonist… Nearly thirteen years old, James make a sympathetic character in both worlds and readers will gladly follow him through the portals for the pleasure of his company as well as the need to know what will happen next." – Starred Review, BOOKLIST

“Curry brings history remarkably to life, particularly after James is recruited to the Children of the Chapel Royal, has a part in Ben Jonson's new play Cynthia's Revels and is swept up in preparing a solo for the Queen on Twelfth Night day, discovering how much singing matters to him. The tension between James's increasing involvement in the early 1600s, and his need to maneuver a way back to the present near to when he left will keep young readers turning the pages.” --KIRKUS REVIEWS