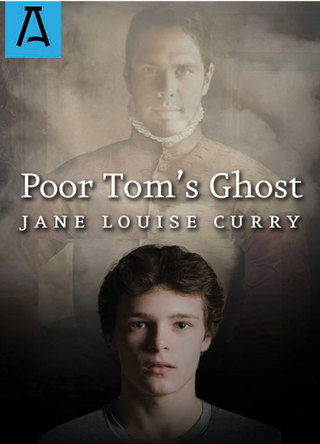 When the Nicholas family of POOR TOM'S GHOST—Roger, his actor-father Tony, stepmother Jo, and young step-sister, Pippa—first see the derelict old house at Isleworth, near London, that Aunt Deb has left them in her will, they are sadly disappointed. Thirteen-year-old Roger's disappointment is the greatest. All his life had been spent in moving from place to place with his gifted actor-father, and he longs for a home, a place to belong.

But then Roger and his father discover under peeling wallpaper and damaged paneling evidence of a much older, more graceful house, and the delighted family sets to work. But...

But that night the old house is filled with a sound of wild grieving that Roger traces to an empty room. The ghost he sees there is Tom Garland, an actor at the Globe theatre in Shakespeare's London, and not long afterward Roger's father, playing Hamlet in London's National Theatre, is caught up, unaware, in Tom's old tragedy as the Plague of 1603 sweeps London. It is Roger who must find a way to mend the past before its heartbreak is repeated in the present.

"All ends well with perfect emotional logic; who cares about the other sort where deep in a fast-moving and absorbing story like this one?" —Jill Paton Walsh

“This is just quite simply a lovely time travel story. The past comes gradually into the story like an incoming tide...slowly pulling the characters in the present back into time. The ghost story aspects of the present and Roger's experiences back in 1603 are both delightfully spooky and full of tension.
… but what makes this book stand out is the finely drawn characterization of young Roger. He's a lonely, tense,and apprehensive boy, desperately hoping for peace and stability, and Curry does an excellent job using the events of the past to push Roger (and his family) into a new, safer place.
In short, this is one of those lovely books that I not only would have loved as a child, but enjoyed very much reading for the first time as a grown-up!” --CHARLOTTE’S LIBRARY