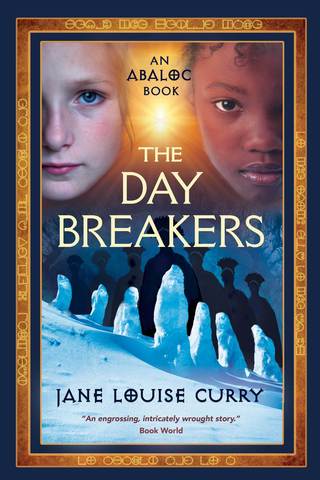 
On a bitterly cold day, Callie and Liss stumble into a mysterious underground chamber on the hill they are exploring. Worried when the girls fail to reappear, Callie's brother, Harry, follows them into the opening into the slope that widens into a dark, echoing chamber. The three children—two black and one white—find themselves far back in time, in a clear, bright land that is vividly green in contrast to their own snow-covered West Virginia mill town. Trapped among an ancient people whose culture is completely alien to them, they soon are involved in a ritual so strange that they do not at first realize their peril. They are saved when the touching of a small blue-green stone found back in the cave proves to be the means by which they can return to their own time.

But can they rely on this always to work as it does the first time? In spite of the possible menace awaiting them in the long-ago, Callie, Liss, and Harry knew they were needed to help those few among the early people who were their friends. In the days that followed, the problems of their own world--the threatened closing of their school and the malevolence of Liss's young invalid cousin--somehow merged with those of the past world, and as they found themselves sometimes in one, sometimes in the other, they slowly discovered the link between the two. In this absorbing companion to Beneath the Hill, Jane Louise Curry has created a common meeting ground where hard-core realists and devotees of fantasy will find the best of both worlds.

What the reviews say:

The gift for fantasy and the superb craftsmanship that mark Jane Louise Curry's earlier books are richly manifest in this engrossing, intricately wrought story…. . The children's efforts to understand and to help their friends of Abáloc by deciphering their alphabet and their discovery that the perilous past and the problem-filled present are indissolubly linked, for both good and evil, are superbly handled. The writing is vivid, the ideas challenging, the children fresh. and alive. –Polly Goodwin, BOOK WORLD

The ability to slip with ease and accuracy from one vocabulary and style to another is one of the chief strengths of The Daybreakers, a worthy American heir to the great tradition of E. Nesbit and C. S. Lewis….[T]he way that the plight of the people of Abáloc and The schools of Apple Lock are linked, and both are saved by the courage, caring and active brains of Miss Langley’s class, is deeply satisfying. THE LISTENER

An odd, intelligent… story is Jane Curry's The Daybreakers (Longman 22s) with its Nesbit-echoes ("The Amulet"), its archaeology {American pre-Columbian), its dashes of myth, its school and family yarn--and its handsome antique code for cipherers to crack, It also has a cast of black and white children, black twins slightly in the lead. Snow, snow on the town of Apple Lock, in the Ohio Valley. But the seven snowmen vanish in the night, leaving ragged trails. Following these, the children break through time, enter the beautiful, ominous ancient Abáloc. --THE OBSERVER