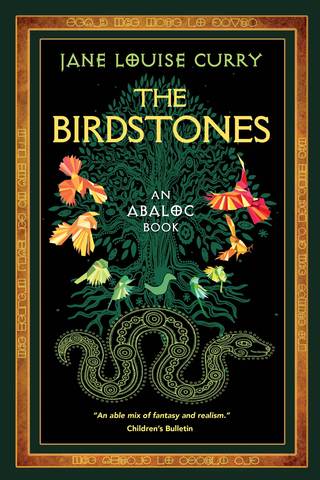 Soon after the new school year opens in Apple Lock, a series of unusual happenings plunge Mike—“Pooch”—Pucci and his friends into a mysterious adventure that had its beginning sixteen hundred years earlier on a nearby island in the Ohio River. First, Pooch discovers on the island a very old stone, carved like a bird. Then the girls in his homeroom "invent" a new student as part of an elaborate hoax in mild protest against double sessions and overcrowding. Next, a wave of puzzling burglaries strikes Apple Lock and odd-looking strangers are seen around town. Most alarming of all, "Dayla Jones," the imaginary girl, seems to take on an actual life of her own and turns out to be at the heart of the riddle of the birdstones.

In this comic, sometimes scary, story, a sequel to The Daybreakers, readers will meet a number of old friends from the earlier book as The Birdstones deftly weaves past and present into a fascinating net of plot and people to draw the reader deep into an ancient riddle.