Over the Sea's Edge 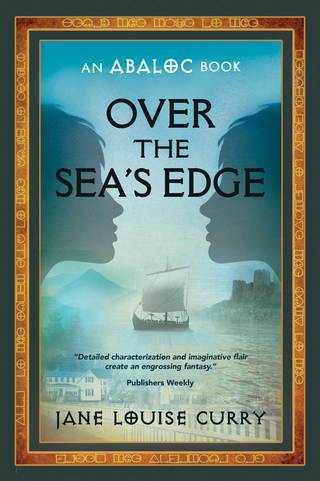 
It is after he finds a curious silver medallion in a cave along the Ohio River that Dave begins seeing the oddly dressed boy on the way to and from school. At first he envies his long hair and exotic clothes-- until he sees that they are wearing identical medallions and that the boy is his own double—his “doppelganger.” Envy turns to alarm and then panic when, accepting the boy's proffered medallion in exchange for his own, Dave finds that he has changed places with him and has been thrust eight hundred years back in time, to a castle in medieval Wales.

At first he can think only of how he is to return home, but gradually his own past seems less and less real, and slowly he grows into this new self, becoming instead Dewi, the dreamer of adventure.

Dewi had his medallion from his father but now his father is dead and Dave/Dewi finds himself dog boy to the dispossessed prince, Madauc, “his” father's boyhood companion. Madauc, outlawed by his brothers, dreams of riches to be found in the legendary seven cities of Antillia over the sea's edge, though Dewi scarcely knows what he can hope to find there. Their journey and their encounters in the amazing New World, where prophecies come true and past becomes future, are at the heart of this strange story of "coming home."

What the reviews say:

"Dave Reese in twentieth-century Ohio is transported, through a mysterious coincidence of personalities, into Dewi Rhys, a dog-boy in Wales at “a strange and frightening time when brutality and chivalry rode the same horse.” He attaches himself to a princeling-master who escapes from plotters and murderers by sailing from Britain to those mythical western lands of Antillia and the golden orchards of Avalon. So Dave-Dewi returns eerily to a New World that was already very old when Columbus refound it. His adventures among the pre-Columbian peoples are richly complicated and exciting..." --Philippa Pearce in THE GUARDIAN

"“Jane Curry transports readers from the present to the past and back again in a rousing adventure-fantasy that is a companion to “The Daybreakers.” A strange silver medallion takes young David Reese back in time to medieval Wales where he becomes Dewi Rhys, a boy involved with Prince Madauc's adventure to find the seven cities of Antillia. In Over the Sea’s Edge Jane Curry has supplemented her story with detailed characterization and imaginative flair that combine to create an engrossing fantasy. --PUBLISHERS WEEKLY

"...the whole is a fascinating and daring exploration of the meaning of identity and the quest for personal realization within the limiting circle of time." — Horn Book