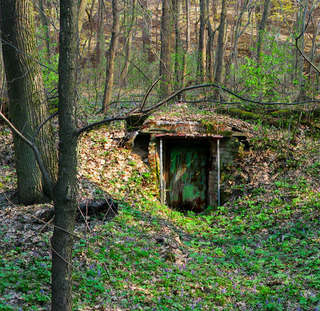 But Mrs. Dekany had been at her kitchen window when the children came out again, so the next weekend Mr. D., knowing that the gate was see-through and tempting, rounded up some boards and hinges and a padlock, and cut an old door down to size to shut the outer entrance, too.

Holes in hills are fascinating. When I was ten or eleven and on my way to school, not far from the bottom of the path I took down through the woods to State Street, there was an eight or ten-inch high opening under a stone ledge into what my imagination liked to think could be a cavern full of wonders. However, my common sense told me first that I'd better bring a flashlight and take a look inside before I tried to wriggle in. Secondly, it told me that I was too large, but the sandstone at the sides looked crumbly enough to carve wider with a soup spoon or a trowel. "Crumbly" was the word that made me flinch. I could just see the half of me that was skirt, panties, legs, socks and oxfords flailing in the autumn sunshine and slowly twitching into stillness as the hill clamped/ crumbled-- onto my top half. So I never even brought that flashlight down for a look. But I do remember the fascination...