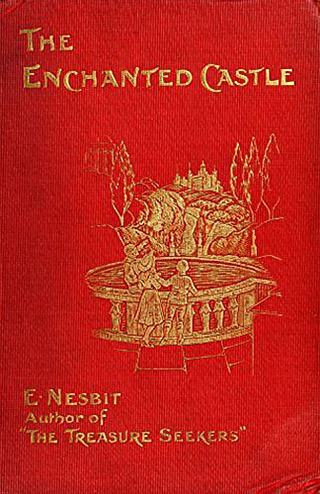 That "book I had been looking for since fifth grade," I mentioned at the end of my last post? Here's that story...

I had a taste for fairy tales as a child, but “fantasy”—except for the OZ books and a few others—was in short supply in America in those days, so I had to sigh and make do with whatever else came to hand. Being a greedy reader, I simply devoured my way along my parents’ and grandparents’ bookshelves. Our Curry grandparents had “sets” of books, most of them soberly unfantastic: all of Nathaniel Hawthorne, all of Dickens, Carlyle, The Letters of the Presidents, George Eliot and assorted other worthies of the nineteenth century. So, even though much of it sailed right over my head, I read them all and—the mind reels—I read evenThe Letters of the Presidents, of which there must have been eight or ten volumes. (I can only hope that I skipped like mad.) Fortunately, our Grandfather Willis had many more books, and livelier ones, including mysteries and adventures, even King Solomon’s Mines and a Tarzan or two. After Sunday dinner on Vine Street my father took a nap on the dining-room sofa, my grandfather settled back in his living-room armchair to read, and I sprawled on the floor at his feet, propped up on my elbows, with the Sunday “funnies” or a book. The rest of the family left us alone as they gossiped in the kitchen over the washing-and-tidying-up, and bustled or drifted around the house (or in the case of my little sister and the cousins, raced in and out). I’m sure they all thought we three were hopeless.

BUT when I was in fifth grade we moved to Kittanning, Pennsylvania, and a new school with its own real library and even more shelves to conquer. And on one of them I encountered fantasy with a capital F. The title was wonderful: The Enchanted Castle. It had Jerry, Jimmy, Kathleen and Mabel, an enchanted castle, magic, treasure, terror, and even a bit of grownup love story.

I loved it. Re-read it right away. But, in the middle of the school year we moved again, to Johnstown, Pennsylvania, and the fiction shelves in our new new school library had no enchanted castle. I mourned for what seemed ages. I wanted to read it again and again. But, alas, the title was what had attracted me, and I had paid no attention at all to the author’s name. Why on earth I didn’t think to ask Miss Beabes, our school librarian, I’ll never know. (If I had, I could have saved up, bought my own copy and saved years!) Afterward I did find on those shelves T.H. White’s The Sword in the Stone and its sequels, which were a help in that time of grief. I had no idea at all that there was a growing world of fantasy Out There to be discovered, and in time Jerry, Jimmy, Kathleen and Mabel faded, to be remembered wistfully but eventually only rarely.

I rediscovered fantasy only after I went to UCLA for an English major and from there on to Stanford University as a graduate student, and was working in the summers in the Children’s Books department at Vroman’s Bookstore in Pasadena. At Vroman’s, a growing trickle of CalTech graduate-student physicists, astronomers and whatnot came in in search of something called “The Trilogy.” (The Lord of the Rings had been published and popular in Britain since the mid-’Fifties, but only now was an authorized version available in America). I began reading The Fellowship of the Ring in the stock room on my breaks, but on my return to Stanford, the single Library copies of the other two volumes turned out already to have long waiting lists.

Not only was The Trilogy amazing—it was a perfectly respectable private passion for a medievalist, which I suddenly was. I abandoned Eighteenth-Century English studies for Old English and Middle English as Alexander Pope and epistolary novels paled in the face of Beowulf and the monsters, the world of faerie, and the tales of King Arthur. I joined the International Arthurian Society. I wrote a scholarly article or two. I had waffled for long enough. I was firmly on track to become a Professor of Medieval English Literature.

“But” gets us back to that university year in London where my last post left us, when I happened one lunch hour to be browsing along the front-room shelves in Foyle’s, the famous bookshop on Charing Cross Road. When I lifted a finger and my life changed.

That finger had come to rest on The Enchanted Castle, by one E. Nesbit.

And I never did become that Professor of Medieval English Literature.

I am also a former East Liverpudlian and I just finished reading, “The Lotus Cup”. It was fantastic. I would love to talk with you more about it if you would like. This blog is the first avenue I found to reach out to you directly. I hope that this message gets to you. Thank you for writing a beautiful book about our home. I hope to hear from you soon.

Dear Trevor,
Welcome to the blog! I'd be delighted to answer any questions you have about THE LOTUS CUP or its background. I enjoyed both the writing and the return-to-ELO "research" visits immensely, and it's great to hear that you love the book. (And if my replies don't come on the dot, my apologies. This summer has been frantically busy so far!)