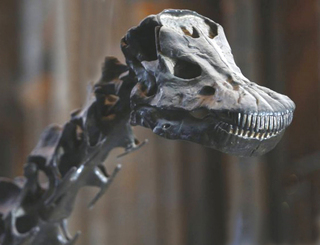 Dippy? Dippy the Diplodocus. My mascot? In the October 19th post? Well, I'd known there was an Italian Dippy, and just assumed he would be in Rome. He's not. He's apparently been in the Museo Geologico Giovanni Capellini in Bologna, up north, ever since he came to Italy. Bad luck for me, because I can't change my schedule here, or go to Glasgow in January to catch British Dippy on tour. I've been in Scotland in January. Too bad there isn't one of him in Los Angeles.