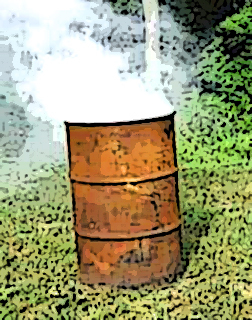 After my first book, Down from the Lonely Mountain (my retellings of California Indian tales), my editor Margaret McElderry urged me to write an "all my own" book for children. I was at a complete loss. I had written short stories--and was several chapters into a comic novel, but it had never occurred to me that I might write a story for children. I was busy, so I dithered and delayed but finally came up with a picture book story titled The Ballad of Bombur Bee. A Western, would you believe? Margaret rejected it almost by return mail, but with a generous "you can do much better than this," and an invitation to do just that. I wasn't crushed about Bombur, because I hadn't taken him very seriously in the first place. Fortunately, before putting him aside, I did take the time to re-read the story both as a conscientious English Lit graduate student and-- more importantly-- as a former child. And I was appalled. It stunk! Cutesy-poo characters, cartoon-flat! A cliché plot that could have beaten Dick and Jane down to zero on the excitement scale! As a child I wouldn't have been caught DEAD reading it.

I wasn't just embarrassed. I was mortified, and in my mortification I dashed out the back door of the farmhouse (I was spending the summer on my parents' Pennsylvania farm en route to London from California) and around to the burning barrel at the edge of the vegetable garden (we burned trash 'way back then because we didn't know any better). One match, and Bombur Bee, page by page, went up in a brilliant, spirit-restoring, heartwarming blaze. When it had burned down to ash, I went indoors, then up to my bedroom, closed the door, and sat myself down to Think... (about what, more next time around-- or the post after that...?)

Ms. Curry, I wasn't able to find another method to contact you, so hopefully it's alright that I'm using this blog post to ask an unrelated question...

Thanks, and I look forward to your response!

Yes, Michael, it's fine to ask a question here since-- mea culpa!-- I haven't yet set up a Contact page.
In my library and online research in 2002 I didn't find any collections of Texas Indian tales, so I ended up camping in the Folklore and Ethnography sections of the UCLA Research Library and searching the indexes of every volume in every series of possibly-relevant journals for every Texas and Southern Plains tribe, for stories suitable for children: a real grind. Today internet searches are much more productive, but even so an Amazon search for "Texas Indian Tales" turns up only HOLD UP THE SKY, and a Google search at first seems unhelpful. Try searching by tribe. I just now tried "Caddo tales" and came up with a number of promising links, including
http://www.firstpeople.us/FP-Html-Legends/Legends-C.html, a large general collection with hundreds of stories listed alphabetically by tribe. Unfortunately, as with much online, the sources aren't given, but I also found George Dorsey's TRADITIONS OF THE CADDO (1905), the source of one of my retold Caddo tales, so tribal searches can turn up at least some primary sources. Happy hunting!